As I sat looking at the fairy lights on my Christmas tree last week, I accepted that for another year I would feel nothing. Or at least, I would not feel what I am supposed to feel. I put up this tree and decorations for my young children but I’m aware that I don’t have the same emotional connection to Christmas that others do.

I am purposefully trying to give my children the memories I was denied. I want them to feel the ‘magic’ of Christmas that others talk about. The warm feelings when certain songs are heard, when particular food is smelt. The excitement of opening up the tiny doors on an advent calendar, counting down the days until it’s time to open the presents. But somehow, 20 years on, I still don’t feel as though I really fit in.

To me, growing up and seeing a Christmas tree was a sign that the owner of the tree was ‘pagan’, a mark that they were an unbeliever, that they were angering God, and thus would end up dying a horrible, gruesome, and much deserved death. At least this is what I was told. I was cognizant of the fact that people would use this pagan holiday to overeat and over drink, and that the only reason they gave gifts was out of obligation. It was pointed out to me by my religion that these people were just spending money because they had to, that they didn’t really care. Christmas, I was told, was just an excuse for materialism.

I remember hiding from carol singers, and being excluded from Christmas themed activities at school as per my mum’s request. After all, I had to avoid unnecessary mingling with “worldly” people. Around me, children would be making Christmas cards to take home or would be having fun taking part in other creative and festive activities, but I would not, could not, participate. My children seem to be doing a different Christmas themed activity everyday at the moment and I can’t help but reflect on how being excluded from all this must have felt for the younger me.

Christmas cards were especially hard to deal with. I always felt left out if I didn’t receive one, but knew I could not accept them. I remember looking away shyly when people gave them out, trying to spare the child’s embarrassment at not giving me one, even though I had said I didn’t celebrate Christmas. Sometimes they would give me one (probably just to be nice, or because they felt sorry for me, or maybe because their parents forced them to), but that was even worse. On these rare occasions, I would quickly stuff the card into my bag, wondering what to do with it. My usual solution was to put it in the trash bin quickly when I got home, to avoid the disapproving glance of my Mum. I felt guilty just having it in my possession.

The Ghost of Christmas Alienation

I left the organization over 20 years ago, when I was around 18 years old, and was shunned by my family and friends. I ran away to London to escape the awkwardness and shame of being an apostate. While in London, some friend or coworker would inevitably invite me to their house for Christmas, because they wouldn’t hear of someone spending the day alone (which was all I wanted to do). So I would go along, always uncomfortable because I had no idea how to behave. I would stress out in the run up about gifts… what should I buy? How much should I spend? How should I react to receiving a gift? Will I have to say ‘Merry Christmas,’ which was still like speaking a foreign language to me?

Almost always I was thrown into a family Christmas, where I would be the only outsider and have no idea what to do. Each family has their own Christmas traditions and I didn’t even know the basics. Although I appreciated their kind intentions, I always felt like someone was going to ‘discover’ me as an impostor, an interloper on their festivities- somewhere I didn’t belong.

For many years I drifted from one friend to another, one Christmas gathering to another- a different experience, a new awkwardness each time. Trying to feel what they felt. Wishing I could feel what they felt. The Christmas jumpers, the ceremony of gift opening, different yet similar each time. Then there were the years where I just stayed at home with my partner. Just drinking…mostly. We exchanged gifts between us; that was a little easier than a lot of expectant eyes on me, but it still didn’t feel right or natural.

And now I have two extremely exuberant and amazing children, excitedly counting down the days to Christmas, expectant of a visit from Santa. The tell me all about ‘Baby Jesus’, whom they have learnt about at school. They are over the moon with their decorated tree, and hoping for snow on Christmas day, just like all the Christmas specials promise them. I do my best to be excited with them, try to sing along with the Christmas songs they have learned. I still struggle with the words, even after having been bombarded with these mind-numbing songs from mid October onwards working retail. It’s a second hand excitement; I love seeing my children so happy and enraptured with the magic of the season, but I don’t feel it myself.

When I first parted company with the Witnesses I still fervently believed so many of their teachings, but that wasn’t why I dreaded Christmas. I just felt utterly out of place. In many ways having children to focus on has helped greatly, diverting attention (imagined or otherwise) away from me. I feel that no one is watching as I unwrap gifts, or listening out for my ‘Merry Christmas’ over the squeals of my children. But I still find it a difficult time of year. The focus on families doesn’t escape me and I can’t help but reflect of the fractured nature of my own. Of course I know I wouldn’t be sitting around a table laden with food and pulling crackers with them even were I not shunned, but it still affects me.

I find myself envious of the many ex-JWs that I see happily putting up their decorations and enjoying all the season has to offer. I wonder whether I am just ‘not there’ yet and perhaps it will come to me one day.

Sometimes I feel like the only ex JW that isn’t enjoying it!  Am I doing something wrong, or is this my fate?

The Ghost of Christmas Future

But this all changed a few days ago when I attended my first ex-JW Christmas dinner.  It’s probably the most comfortable I have ever been at Christmas, opening a gift and pulling a cracker, laughing with my new friends and admiring each others gifts. Each person who sat at that table was at a different point in their transition out of the faith; maybe out for 20 years like me or just out for a year.

But we all share in that knowledge, that history – unspoken yet understood.

Everyone around that table was a little out of place – we were in our own little Land of Misfit Toys-  but  we were also perfectly ‘at home’ with everyone else. It was weird and wonderful to be doing the ‘normal’ thing, together.

We all kind of need that kind of fellowship (to use a very Watchtower word), the friendship and support of people with a shared experience and hope for the future.  I think I experienced Christmas magic, even if just a little.

Maybe that is what Christmas is all about. Lydia has also appeared in a number of interviews and videos discussing ExJW life and her JW Activism. A selection can be found below. 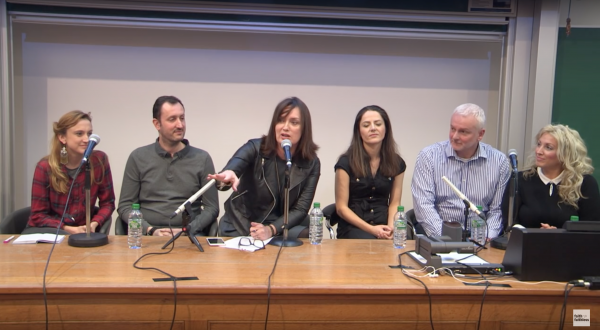 Why class distinction among Jehovah’s Witnesses is alive and flourishing

39 thoughts on “The Friday Column: The Ghost of Christmas-That-Never-Was”