Most Jehovah’s Witnesses consider the Watch Tower Society to be almost synonymous with “God’s organization.” As such, they are to be obedient to all instructions passed down from it as though they are receiving these words from Jehovah himself.

But at least one prominent Jehovah’s Witness now claims he does “not answer to Watchtower,” and has even declared that Watchtower “does not, and never has had, any authority over me.” Who is this bold man? None other than Governing Body member Gerrit Lösch!

Regular visitors to this site will recall the recent lawsuit in which Watchtower received a $13.5 million judgment for its part in the abuse suffered by Jose Lopez at the hands of Gonzalo Campos, who was allowed to molest multiple victims in San Diego in the 80s and 90s without the organization’s intervention.

One of the reasons why the lawsuit went so badly for Watchtower was due to its failure to comply with court orders requesting, among other things, the organization to produce the most senior Governing Body member, Gerrit Lösch, for a deposition.

When this and other reasonable requests of the court were flatly refused by Watchtower, they had restrictions placed on them barring them from responding to the evidence put forward by Irwin Zalkin on Lopez’s behalf.

Now, the personal “declaration” of Gerrit Lösch, in which he gives his reasons for refusing the court order, have been made available online. The signed three-page document is viewable below…

It is more than likely that Lösch’s comments about Watchtower were a means of distancing the Governing Body from Watchtower, and insulating Governing Body members against any court action incurred by the organization.

Even so, at best Lösch is splitting hairs by suggesting he is ONLY answerable to the Governing Body, of which he is a member. At worst, he is seriously misrepresenting his personal relationship with the organization, and that of Jehovah’s Witnesses in general.

One can only imagine what fate would befall an ordinary Jehovah’s Witness who stood up before a packed kingdom hall and uttered the words “I do not answer to Watchtower,” and “Watchtower does not have, and never has had, any authority over me.” Undoubtedly, the back room would beckon! And yet such an individual could point out that he is only repeating the words of an exemplary Governing Body member.

Lösch’s statements about his power over the organization are similarly evasive and disingenuous. While it may be true that he does not have “any authority as an individual to make or determine corporate policy for Watchtower,” the statement is worded in such a way as to distract from the fact that Lösch is very much a decision-maker for Watchtower provided these decisions are met with the approval of his fellow Governing Body members.

All things considered, sincere Jehovah’s Witnesses will be dismayed at the lengths one of their leaders (a member of their “highest ecclesiastical authority”) has gone to in order to avoid taking a stand in defense of the organization.

It was Jesus who purportedly said, “People will hand you over to local courts, and you will be beaten in synagogues and be put on the stand before governors and kings for my sake, for a witness to them” (Mark 13:9, New World Translation) – and yet rather than take his place on the stand to give a “witness,” Lösch has done everything in his power to distance himself from ‘God’s organization’ – denying almost any affiliation with Watchtower.

It is becoming increasingly apparent that, in order for a Jehovah’s Witness to respect the Governing Body members, and give them the reverence they crave, they must know as little as possible about their words and actions. 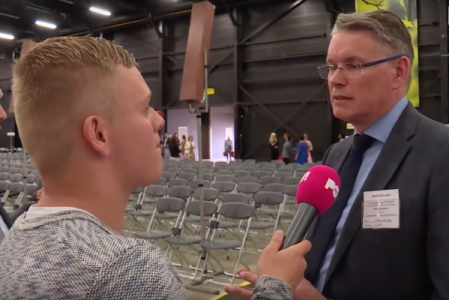