Yet another child abuse cover-up story is emerging in the media, this time from Bradford, UK, where elders disfellowshipped a pedophile for horrendous abuse of two boys over a five-year period, but failed to report him to the authorities.

Massimo Capazzo, 41 (otherwise known as Andrew Collins), eventually turned himself in to police and confessed some of his atrocities, saying he wanted to clear his conscience because he had committed “a terrible crime.”

Only after police investigated did they discover the full extent of his depravity, namely that Capazzo had plied two young boys with alcohol and made them watch pornographic material to the point of making one of them “numb” to performing sexual acts on him an estimated 40 to 50 times.

The abuse is said to have had a “profound and continuing effect” on the two boys, who are now adults, leaving them in need of professional help due to feelings of worthlessness and guilt.

Capazzo was investigated by elders while still a Witness and disfellowshipped for his behavior. However, they failed to notify police.

As Prosecutor Sophie Drake explained, “Although he was shunned by the congregation he was still allowed to attend meetings. At that time matters were not brought to the attention of the police.” In other words, Capazzo’s elders (or the Society’s legal department who instructed them) considered him to be someone else’s problem and felt he should be left free to re-offend elsewhere in the community.

Capazzo has now been jailed for six years and eight months for what Judge John Potter described as “systematic child abuse.” He will also be made to sign the sex offenders register. Though it was acknowledged that his confession to police was a mitigating feature to his credit, the judge also noted that he had only mentioned his abuse of one boy when he first spoke to police, not both of them.

Capazzo’s sentencing comes less than two weeks after media reports of another child abuse cover-up by elders in the UK involving Gordon Leighton. And just days ago, video footage was broadcast by a San Diego news station that was said to show monstrous pedophile Gonzalo Campos admitting that elders knew of his behavior but left him free to spend time with other boys in the congregation.

Any Witnesses who dare to look into the growing mountain of evidence of Watchtower’s terrible child abuse track record will be shocked that an organization claiming to be under divine guidance has put so many children at risk. We can only hope that, as more stories come to light, Watchtower will come under increasing pressure to change its policies in favor of the children it has a duty to protect rather than those who would do them harm. Deluded or dangerous? – My thoughts on Anthony Morris III following his Rome visit 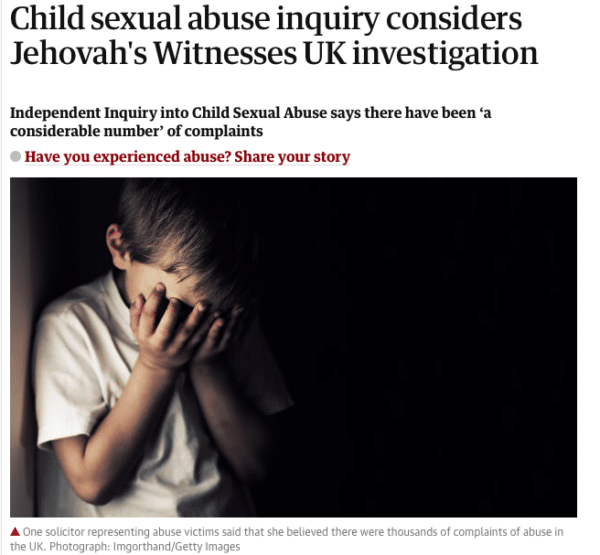