Governing Body member Tony Morris has used the July 2015 episode of JW Broadcasting to indulge in an astonishing rant about child abuse, seemingly in response to the onslaught of negative publicity Watchtower has faced in recent years.

In his nine-minute statement on the matter, Morris shows two video presentations and reads from a 1982 Awake! magazine in attempting to make the case that Watchtower has always been “pro-active” in making the protection of children a “top priority.”

At one point, Morris unleashes an astonishing swipe at gay people in an apparent attempt to scapegoat homosexuals as being the main perpetrators of child abuse. “It [an Awake! article] warned about homosexual men who prey on and advocate the right to use boys for sex. Shame on them!” he says. (See time stamp 02:49 in the video below.)

The 1982 “‘Chickens’ and ‘Hawks'” article to which Morris alludes is a shameless piece of propaganda blaming homosexuals in general for child prostitution rings that flourished in the 80s and 90s, and which society itself has condemned (such as in the 1994 award-winning documentary “Chicken Hawk: Men Who Love Boys“). (See Wikipedia article)

Morris’ exploitation of this isolated controversy to make a sweeping generalization about gay people represents only the latest example of what appears to be a pattern of homophobic bigotry above and beyond even the scathing condemnation of gays and lesbians found in Watchtower publications.

Last year Morris was voted one of 2014’s craziest “right-wing nutjobs” by Advocate magazine for his baffling comments at last year’s United States Branch Visit, at which he warned of a conspiracy whereby homosexuals are designing tight clothing merely to lust after men’s bodies. (See time stamp 03:20 in the video below.)

And only recently, at the 2015 regional convention, Morris made a not-so-thinly-veiled declaration of his disapproval at Ireland’s recent referendum legalizing same-sex marriage.

Clearly Morris has an axe to grind against homosexuals for reasons best known to himself, but that he should mobilize his bigotry against gays in defense of the organization’s outrageous record on mishandling child abuse is bewildering to say the least.

Head in the sand

Homophobic scapegoating aside, Morris’ comments are a fascinating example of the organization’s “head in the sand” approach in the face of mounting media scrutiny of Watchtower’s child abuse track record.

This strategy was most recently deployed by Stephen Lett, who used a recorded “morning worship” speech to claim that media attention on the issue was nothing but “apostate-driven lies and dishonesties.”

As much as activists like myself desperately wish there to be no problem in this area, and as much as we yearn for JW children to be protected, various facts are well-documented and glaringly obvious, namely:

None of the above pressing issues are addressed or even alluded to in Morris’ nine-minute statement. Instead he heaps praise on the organization for taking “a decisive stand,” for being “pro-active,” and for making the safeguarding of children a “top priority.”

A reputation to be proud of?

Morris even summons the gall to claim: “We are proud of our reputation in this regard.” Irrespective of what Morris or other Governing Body members may think of their handling of child abuse, if there is one thing beyond dispute in this area, it is that Watchtower’s reputation is not one to be proud of.

One possible strategy Morris might have employed if he had an ounce of humility would be to throw his hands up and admit that, like other organizations, Watchtower was simply caught off guard at a time when the threat posed by child abuse wasn’t fully understood.

Instead, Morris adopts the reverse approach by suggesting the organization was always ahead of the game while secular authorities were floundering and “somewhat naive” as to the magnitude of the problem.

As an example of Watchtower’s foresight he parades the “landmark” 1982 Awake! magazine as highlighting the scourge of child abuse over thirty years ago. But it should go without saying that it is one thing to highlight child abuse as a problem, but another thing entirely to offer effective advice.

For example, the article in that magazine titled “To End Child Abuse” gives the following advice, few aspects of which can be considered especially relevant…

What Morris doesn’t mention is that not one of the magazine articles on child abuse published over the last few decades specifically tell Witness parents to go to the authorities with any and all allegations of abuse, which is surely the first priority in the wake of a crime of such magnitude being perpetrated. One 1993 Awake! article even goes so far as to suggest that, in certain cases, “the legal system may offer little hope of successful prosecution.” (Awake! 1993 10/8 page 9)

Morris attempts to throw up a smokescreen early in his presentation by asserting: “Our policy as an organization is that one professing to be a victim, or his parents, should never be discouraged from reporting the incident to the appropriate authorities.” But this is nothing more than a play on words, and a deliberate attempt to deceive.

True, Watchtower doesn’t expressly dissuade parents from going to the authorities, but it doesn’t persuade them either. Morris thus overtly relies on the ignorance of his audience regarding the nuances of Watchtower’s policies in an attempt to dupe them into thinking reporting is encouraged, even though the organization has yet to issue such instructions to elders despite repeated courtroom defeats.

At best, Watchtower literature over the decades has taught children to be able to identify predators and report such ones to their parents – the most recent example of which is the Caleb and Sophia cartoon presented by Morris in this video.

But teaching children to resist predators is only a fraction of any meaningful, effective child-safeguarding policy. The whole reason why child abuse is so evil is precisely because, for obvious reasons, children will always be vulnerable in the face of any sufficiently determined and opportunistic predatory pedophile, irrespective of how much resistance they put up.

Any child safeguarding policy worth its salt must thus adequately address what to do in the aftermath of an attack so that pedophiles are swiftly apprehended, and this is precisely where Watchtower falls woefully short. Parents are not told to go straight to the authorities by elders in every instance, they are merely informed that this is their “responsibility.”

Throw into the mix the perception that child abuse is a sin that the elders have a remit to investigate, the importance of “waiting on Jehovah,” the stigmatization of taking your “brother” to court, and fears surrounding slander and false accusations, and the likelihood of the police being left out of the loop entirely becomes all too apparent.

Worse than you think

I recently found myself in a phone conversation with a BBC journalist regarding Watchtower’s mishandling of child abuse. I expressed to her my frustration at the perception among Witnesses and Watchtower apologists that so-called “apostates” like myself are exaggerating the problem of child abuse.

I told her that, if anything my colleagues and I are understating the magnitude of the problem, because some of the horrendous stories we hear about privately simply cannot be publicized for various reasons.

She replied: “Welcome to the world of journalism.” This, apparently, is the challenge all journalists face in covering important stories where the full grisly horror of what is happening simply cannot be revealed for a myriad of issues including privacy, court orders and so on.

Tony Morris and the Governing Body may desperately want there to be no problem regarding child abuse, but as the saying goes, there is no smoke without fire. When you add up the relentless stream of child abuse reports in the press, including several clear instances where Watchtower has been found guilty and ordered to pay eye-watering sums in compensation, it is clear that, far from being ahead of the game, the organization is ablaze with this problem.

And documented evidence in the organization’s own instructions to elders leaves the Governing Body red-handed in not taking child abuse seriously enough by considering it a sin first, and a crime second.

For all his bluster, boasting and outrageous gay-bashing, the frustration and desperation of Tony Morris and his fellow Governing Body members is becoming painfully obvious.

Putting their hands over their ears and saying “la, la, la” in the face of serious accusations of child safeguarding negligence may work for them personally, but this juvenile charade only adds to their culpability as court after court finds Watchtower negligent. And growing numbers of Jehovah’s Witnesses are seeing straight through it.

A full video rebuttal of the JW Broadcasting episode in question is forthcoming, and will be embedded at the foot of this article when complete. 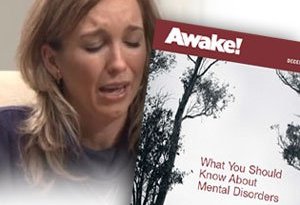 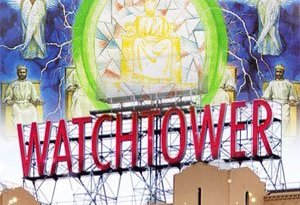 Jehovah and Watchtower – are they now to be thought of as one and the same?